That humorous feeling: how much comedy in the workplace is too much?

The witty can sometimes prosper in the workplace, but take it too far and you may have a problem, writes Lana Woolf

Stephen Fry once said of the great Peter Cook that he was never unfunny, never ‘off ’. When Finito World caught up with the legendary comedian – and great friend of Cook – John Cleese earlier in the year, we asked him what he thought of Finito, and he showed us that he, too, never turns off the taps.

When we told him about our mentoring programs, he was immediate: ‘It’s a very decent thing to do. I’ve heard of a finishing school – and I know Finito is Italian for finished because I eat a lot of Italian food – and I finish it all. But I’ve never heard of a finished school.’

While we were laughing he was continuing, ‘I have heard of Finnish schools but they’re something quite different.’ 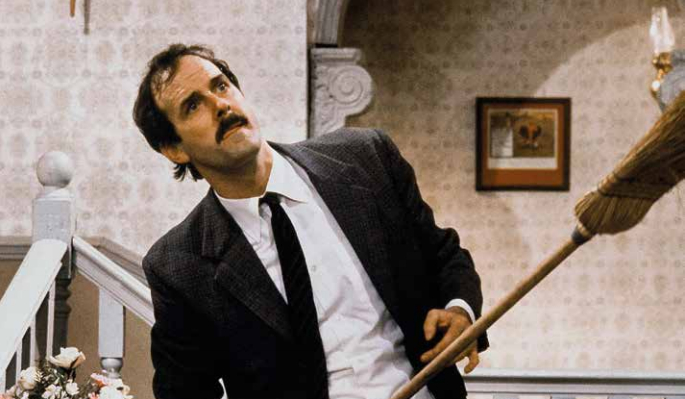 The Monty Python and A Fish Called Wanda star went on to share some advice as to how to forge a happy career. He quotes American comedian George Burns as saying: ‘If you do something you love, then you don’t have to do a day’s work for the rest of your life.’

Wise advice, but our encounter with Cleese also had us thinking about an implied lesson that may be as important: what role does humor play in the workplace?

Well, success in life can sometimes be attributed to ability to get on with people, and that is always to do an appreciation of nuance, which usually goes hand in hand with an ability to navigate intricate situations. The amusing are often, though not always, empathetic.

Sometimes this proposition can have vivid illustrations. It was Jerry Seinfeld who observed that in US Presidential races it is an unwritten law of politics that the funnier candidate always wins. Obama was always funnier than Romney or John McCain; George Bush Jr. was funnier than Al Gore or John Kerry; Ronald Reagan was funnier than Jimmy Carter or Walter Mondale. Clinching for the theory, Donald Trump Jr. was demonstrably funnier than Hillary Rodham Clinton.

But does this translate in the same way in the workplace, which is a less performativity space than electoral politics? Part of the force of a personality like, for instance, Sir Martin Sorrell derives from the sense that he might at any moment bark with delighted laughter even at a difficulty.

Pat Thompson is the founder and managing director of Thompson Dunn, a central London-based psychologists’ firm. For 30 years Thompson has worked with CEOs on organizational culture and creativity in business: ‘I used to deal with delinquent adolescents and then went onto work for Michael Page selecting senior executives. I was once asked: ‘What’s the difference between a delinquent adolescent and a CEO. I replied: “Pinstriped trousers”.’

The jury is out on how funny this is, but Thompson is arguing that humor is a way of making a ‘a difficult truth say able’. It is a form of smoothing – of moving the dialogue forwards in a way that we might miss if we proceeded solely in an earnest register. When asked about humor’s wider role, Thompson offers a two-word THAT HUMOROUS FEELING answer which dovetails with my own experience of office life: ‘Stress release.’

A joke, said Nietzsche, is ‘an epigram on a death of a feeling’: the power of comedy is that it discharges feeling which had been accruing by admitting to that feeling and thereby ousting it.

However, Thompson has a cautionary word about taking things too far, warning against becoming an office prankster à la David Brent in The Office. She also explains that one’s relationship to humor will depend on the tenor of the organization you work for. This can be challenging for women, she explains, recalling how ‘humor in the City was a darker shade of blue in a male-oriented environment. Women are often the butt of a joke and you have to cope with it. In financial services, you have to develop a thicker skin.’

Moving on up: can a sense of humor lead to swifter promotion?

Liam Williams is a professional comedian known for Sheep’s and Lad hood and the now the author of a brilliant debut novel Homes and Experiences. So what led him towards his career? ‘In the workplace, I’ve never known where the line is, and I was drawn to being a professional comedian because you are necessitated to go over that line.’

Did he enjoy: ‘I found that having a laugh with my colleagues was the only thing that got me through the less fulfilling aspects of the job. Obviously, you don’t want to be like David Brent in The Office and you need to find a happy medium between not being too buttoned-up and boring, and not being the idiot with the Homer Simpson tie.’

He notes that much humor comes from ‘absurd corporate language. This twee idea of ‘We’re all a family” – of language that comes down from on high and doesn’t mean anything to us. There’s so much euphemism.’

Employers, then, must be careful not to alienate their employees with language that doesn’t match their real experience. A recent podcast produced by Fair Acre Press called ‘Word Bin’ invited participants to choose their preferred word to bin. A huge number of the choices related to corporate culture: normalcy, incentivize, optimized, moving forward, thinking out of the box, reach out/ reaching out, cascading down, time urgent, upgrade, inputting and solutions.

Nadia Kingsley, the founder of the podcast, told us: ‘I was surprised at how passionately people wanted to bin some corporate speak. Having never worked in an office myself it was a real eye-opener. Some of the binning’s reveal something more than ridiculous management speak – but the old-fashioned hierarchy. For instance, the phrase ‘cascading down’, refers to minions who aren’t good enough to actually go to the conference but are given a version of it by someone above us.’

Former deputy prime minister David Ludington makes a useful distinction between humor in the public and private spaces. Recalling life as the de facto no.2 in Theresa May’s 10 Downing Street, he explains: ‘Humor is vitally important in private. In a tense meeting, a well-timed and well-phrased quip can defuse tension. In the same way, if you looked at both Betty Boothroyd and Lindsay Hoyle operate as Speaker of the House, a joke or an aside can ensure that those tensions which had been building up would suddenly lapse.’

Ludington also points to its impact in a speech: ‘Humor changes the register but also helps the audience to concentrate. A successful joke will make the audience listen as they’ll wonder whether there’ll be another joke coming. And humor that’s well received can get people on your side.’

But he also has a warning against humor used against a political opponent which may also apply to life in a more ordinary workplace. ‘The risk is you get written off as a comic. You need to show you have the comic and the serious. In Shakespeare’s tragedies – even in Hamlet – you have tragedy and serious side by side.’

Then Ludington laughs, recalling some of the inevitable ups and downs of government. ‘The truth is it sometimes feels more like a black farce. And black humor can keep you going in the inner team.’ This chimes with Thompson’s remarks: ‘Humor is an aspect of positive psychology. If you face difficulty in an organization, then looking on the bright side includes humor.’

And if all that doesn’t work, and you find yourself caught in a job you dislike at the age of 40? Then John Cleese has some advice: ‘Don’t just take the money. But if you do and you get to 40, you can always kill yourself, I suppose.’ Black humor indeed.

The Battle for the Soul of the Left

Mental Health in the Age of Covid-19

Sarah Fletcher: our education system is ‘not fit...

Uber Supreme Court ruling: Is this the end...

Bulletin from the Pandemic Front Lines

Keir Starmer is right to put his foot...

‘It worsened my anxiety’: why the estate agencies...